Stooping To Conquer: The Utopian Vision Of Nicole Eisenman (SHS 1983) 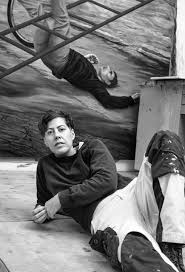 Nicole Eisenman’s new sculpture, Love or Generosity, has just been installed outside the New Amsterdam Courthouse. Gender-fluid, and featureless save for a bulbous nose, with mussed hair and chubby hands, the figure is recognisable from the other over-sized figures of her recent oeuvre. And, like much of Eisenman’s work, Love or Generosity is funny; the figure’s posture is deliberately ungainly, knees bent in a half squat, bum in the air, a little extra flesh pressing over the waistband of its adidas tracksuit bottoms, elements that are comically at odds with the gleaming marble floor of the forecourt and the building’s severe contemporary architecture. A humorous subversion of its immaculate surroundings, the figure seems to offer a glimpse of genuinely utopian possibilities.

Taller than her other figures, this one is a real giant, about five metres high, and it seems taller because of the implied height of its bent posture – at full height it would be twice that size. The formal choice of the bent posture is ingenious, and allows the figure to serve as an intermediary between the large scale of the ten-storey courthouse and the much smaller, human scale. The height of the building is gestured to in the giant’s latent height, while its attention, and therefore ours, is directed to its palm, which, full of intriguing objects, is at our eye level. The sculpture is aptly named: it does feel generous – helping to integrate the rather austere building into its environment, and humanising the architecture with its genial scruffiness. Meanwhile, the giant’s mediation between the building and the human figure acknowledges and makes room for the human scale, which is so often overwhelmed in such contexts.