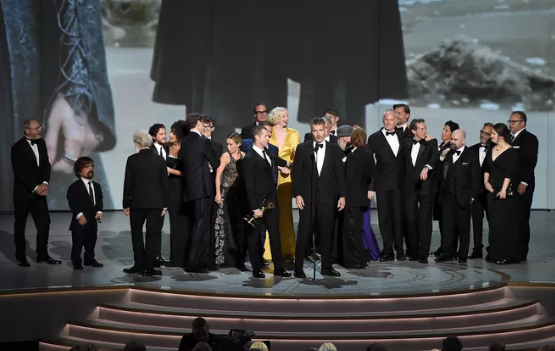 HBO’s powerhouse Game of Thrones returned to the Primetime Emmy Awards after a year away and picked up where it left off, scoring its third Outstanding Drama Series win in four years. The victory came for the fantasy series’ Season 7. It is wrapping its run with Season 8 beginning in 2019.

The win in the night’s final and biggest category helped HBO tie Netflix with 23 total awards this Emmy season, after Netflix had topped HBO in total noms for the first time.

The cast and crew (half of Westeros, it seemed) hit the Microsoft Theater stage after the show’s name was announced, with series co-creators David Benioff and D.B. Weiss starting by thanking the book series’ author George RR Martin, who joined them onstage.

“We could not be without the mad genius of George — thanks for trusting us…” Benioff said.

Game of Thrones regained its crown after Drama Series wins in 2015 and 2016 and leading this year’s total nomination count with 22. Its win bested last year’s champ, Hulu’s The Handmaid’s Tale, along with fellow nominees in the final season of FX’s The Americans, Netflix’s The Crown and Stranger Things and HBO’s Westworld.